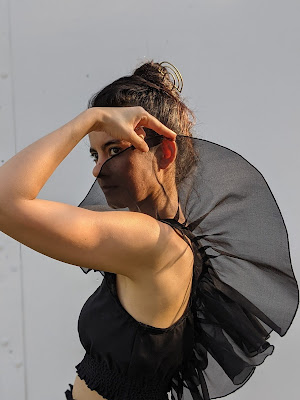 Do you ever just want to make something ridiculous? Like completely outrageous, that you will have slim chance to wear in every day life, but your soul just aches to make it so you can take beautiful pictures and swan around your house in it?? And ultimately so you can just know, you did it.  You made the thing that was in your head! 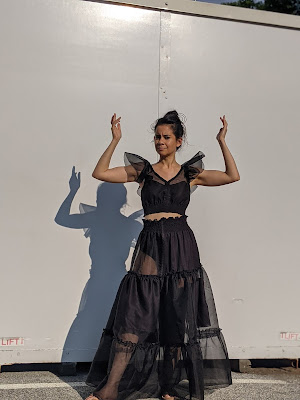 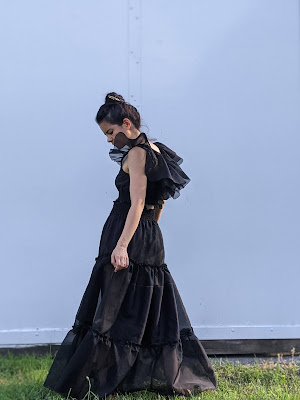 Enter, this black swan, perfume ad, Dior-esque, Imakestagram boldness. I knew I wanted it to have a lot of ruffles and a lot of volume and I eventually decided that if it was going to be something I could work into my wardrobe every now and then, separates would be best. There wasn’t exactly a pattern than encapsulated eeeeverything I wanted though, so I ended up draping this puppy on my dressform.  If you wanted something similar, there are tons of patterns you could hack to get a similar look.  Some suggestions would be the September Crop dress by Cali Faye Collection or the Lena Horne dress by Tabitha Sewer. I’m sure there are lots of options with the ‘big four’ pattern companies as well. 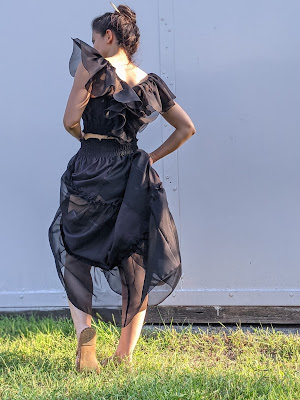 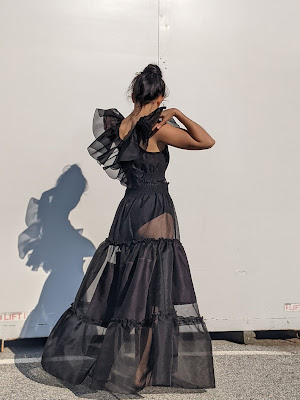 The fabric is black silk organza and it was a dream to work with.  It definitely has volume, but it also has a softness, and if you want to press a crease into it, it takes it like a dream.  Generally I either French seamed or added a rolled hem edge with my serger and both finishes were super easy, and again since it takes a press so well the French seams where a breeze.  There was also the extra bonus fact that I didn’t need to use a press cloth, because press cloths are made out of silk organza.  Lol! 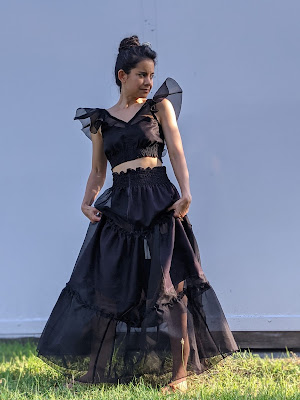 In concept I didn’t think my design was that complicated.  Its a V neck and V back with giant ruffles for sleeves, but I made it a little more complicated because the sleeves start at the front armscye and then travel across the shoulder continuing along the back neckline and then down center back.  I was thinking of a silhouette that would resemble a butterfly in the front and a dinosaur in the back.  Somehow having the ruffle cross over like that, as opposed to just living around the neck line, OR around the armscye OR down the center back, had my mind twisting several different times during construction.  I’m sure it didn’t help that I wanted everything to be as cleanly finished as possible.  For that reason I engulfed them in a French seam and then finished any remaining edges with twill tape. The twill tape didn’t quite have enough give so I ended up going to battle with it on a number of occasions, but in the end I think it looks pretty good on the inside.  If I were to do it again, I might order an extra 1/2 yard of the organza to make bias tape.  That probably would have been the best solution. 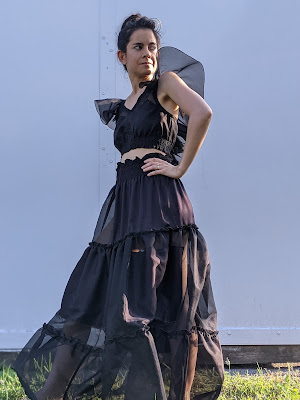 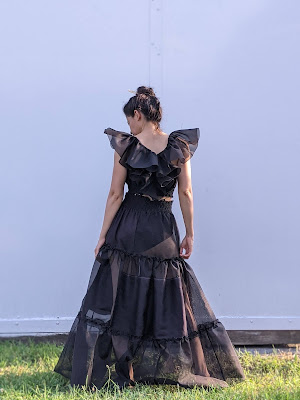 One thing I didn’t do, and I really really wish I had (so hopefully Future Kten will remember this) is I wiiiiiish I had made a muslin.  Just so I could have worked out the construction.  I sewed the right side of the top and the left side of the top completely before connecting them at center front and back, and due to having to work out the process (including maybe unpicking sessions) I think I over worked (and maybe even over pressed) the right sleeve, leaving it a little more floppy than I would have liked.  Oh well you live and learn, and the left side came out perfect.  Go figure. 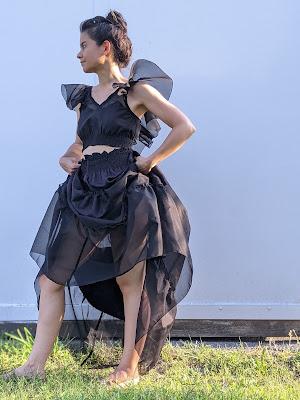 Since silk organza is clearly very sheer I decided to add some rayon twill fabric scraps that I had laying around from a past project to the lower front and back bodices, which I think came out great and I actually sewed them to the outside because I think it really adds to the design with the additional layers and textures. The two layers were sewn together around the boarders and then I shirred the waists as if the two fabrics were one.  I specifically didn’t French seam the center front or back, because if there was only one seam, that would mean it could only be pushed in one direction and I wanted the shirt to look as symmetrical as possible.  For that reason I sewed them right sides together and then just sewed black twill tape over both individual seam allowances on the inside. 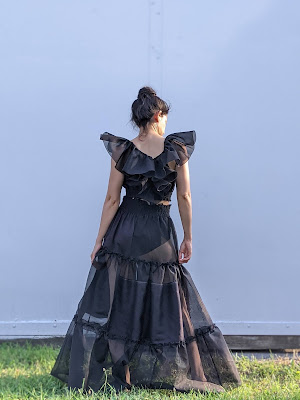 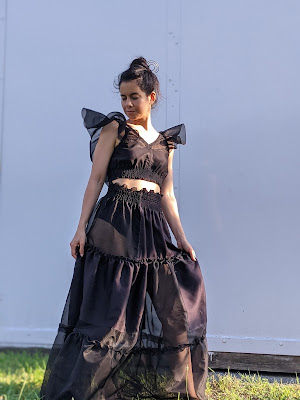 From the beginning I knew I was going to want to sew a big tiered skirt (the bigger the better), so that’s just want I did. I started by shirring the width of the remaining fabric with a little more of my scrap fabric for design continuity.  Then I cut it to a width that felt snug but comfortable around my waist and French seamed it closed.  On the second layer I French seamed two widths of the fabric together and then finished the edges with a rolled hem on the top and bottom and I then added more blocks of the same scrap fabric so there would be pops of sheerness and blocks of opacity.  I also left the selvage edge in tact, which is where you can see faint white lines of stitching.  Again I just think it looks cool.  At this point you may be thinking I must have had a decent amount of scrap fabric… honestly it was probably about 3/4 of a yard, but it was already in pieces, so I basically just squared off the odd shapes I had.  Anyways, once that was done, I ran two rows of gathering stitches along the top, gathered, pinned it down on top of waist tier and then sewed it down in between the two gathering rows.  This was my first time trying that method and I think it resulted in really nice not-smooshed gathering.  The last tier was everything I had left at the appropriate length to hit the floor.  Honestly, the skirt looked good with just two tiers.  It hit just below the knee and somehow felt very wearable, but you know, part of my own mandate to myself was DRAMA.  So I kept going and I love it with three tiers too.  In the end I had about 3.25x the width of the fabric, so it was like less than 2x the second tier, but I think it still came out great.  At that point I had also run out of scraps, so there’s no blocks of opacity on that last tier, but I think it still looks great. 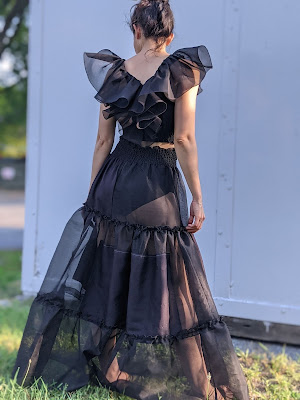 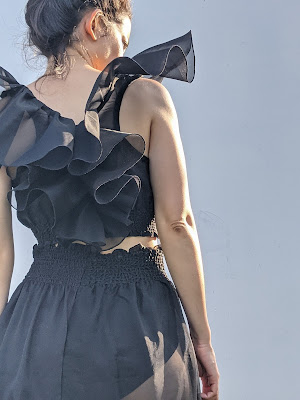 Last but not least I had to sew myself some granny panties to wear over my underwear, so you know, I didn’t feel like I was walking around with my undies showing.  Even if the undie covers are basically undies themselves.  It’s a mind set people…. Also, I think they look really good.  I just used some black cotton spandex I had laying around and  just roughly copied a pair I already owned though I added a little extra width in the back, cut the leg a bit high and then made sure they were long enough to go to the top of the skirt.  In the end I think they’re the cherry on top of the whole lewk, though honestly, they were very much ‘thrown’ together.  I didn’t even add any elastic to the legs or waist. 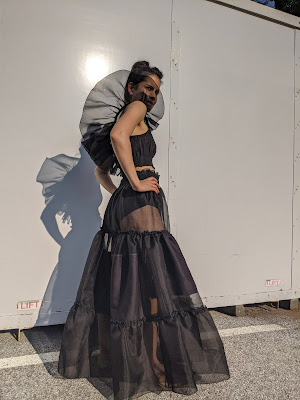 I feel like this make gave all my creativity muscles and problem solving muscles a great stretch and I’m feel very recharged to be honest and I think it’s frickin awesome.  Now… does anyone know of a perfume ad that I can star in? Lol. 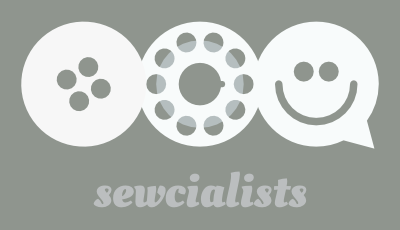